Getting Something to Eat in Jackson

On Friday, April 15 at 2 p.m., Joseph Ewoodzie Jr. and Carla Shedd will discuss Ewoodzie’s new book Getting Something to Eat in Jackson: Race, Class, and Food in the American South in the Craig H. Neilsen Auditorium of the Two Mississippi Museums. Refreshments by Chef Enrika Williams will be provided. The event is free and open to the public. For more information, visit the MDAH Facebook page or email info@mdah.ms.gov.

Eddie Glaude to Speak at the Two Mississippi Museums April 28 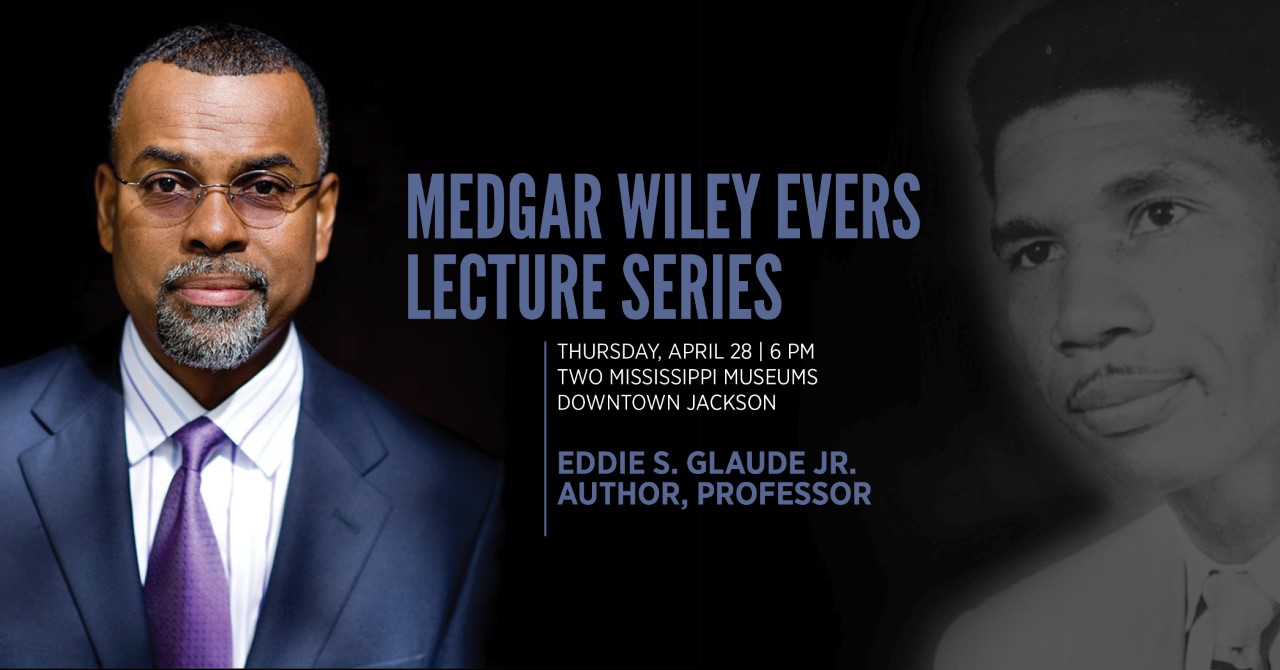 Eddie S. Glaude Jr., educator, author, political commentator, and public intellectual will deliver the Medgar Wiley Evers Lecture on Thursday, April 28, at 6 p.m. at the Two Mississippi Museums in Jackson. The event is free and open to the public.

“I am thrilled that a Mississippi native as distinguished as Eddie Glaude is coming home to participate in our lecture series,” said MDAH director Katie Blount. “I am also excited for his first visit to the Two Mississippi Museums.”

Glaude, a native of Moss Point, is the James S. McDonnell Distinguished University Professor and chair of the Department of African American Studies at Princeton University. His writings include Democracy in Black: How Race Still Enslaves the American Soul, In a Shade of Blue: Pragmatism and the Politics of Black America, and his most recent book, New York Times bestseller Begin Again: James Baldwin's America and Its Urgent Lessons for Our Own.

He frequently appears in the media as a columnist for TIME Magazine and on television.

The Medgar Wiley Evers Lecture Series was established in 2003 to honor the legacy of civil rights leader Medgar Evers, one year after Myrlie Evers made an extraordinary gift to the people of Mississippi when she presented the Medgar and Myrlie Evers papers to the Mississippi Department of Archives and History (MDAH). Previous Evers lecturers include Lonnie Bunch, Henry Louis Gates, Manning Marable, and Robert P. Moses. The series is supported by the W.K. Kellogg Foundation.

The unveiling of portraits of former Governor Phil Bryant and First Lady Deborah Bryant will take place in the second-floor rotunda of the Mississippi State Capitol in downtown Jackson on Tuesday, March 22, at 10:30 a.m. Guest speakers will be former Governor Phil Bryant and MDAH director Katie Blount. For more information, visit the MDAH Facebook page.

On Tuesday, May 3, 2022, MDAH will celebrate the lives of Governor William Winter and First Lady Elise Winter at the Two Mississippi Museums in Jackson. The event is sponsored by Jones Walker LLP and the Foundation for Mississippi History.

Soon after William F. Winter’s death in 2020, Governor Haley Barbour described Winter to Mississippi Today as “a gentleman, honorable and gracious. While our politics didn’t always coincide, I’ve always admired him. He made great changes in the structure of Mississippi’s K-12 educational system . . . He and Mrs. Winter, who is a delightful, gracious lady, represented our state very well, both while he was in elected office and afterwards.”

William F. Winter served as Governor of Mississippi from 1980 to 1984. He had previously been elected to the state legislature, and to the offices of the state tax collector, state treasurer, and lieutenant governor. His term as governor has been nationally acclaimed for the groundbreaking passage of education reform legislation. He was later appointed to President Bill Clinton’s National Advisory Board on Race.

Throughout his political career, Elise Winter campaigned for William Winter, and she was a trusted advisor and policy advocate to her husband when he was elected to office. When Elise Winter was the state’s First Lady, she helped shepherd her husband’s key legislation and hosted social gatherings for prominent Mississippians at the Mississippi Governor’s Mansion.

Elise Winter advocated for improving the living conditions of imprisoned people, worked to increase funding for state correctional institutions, and campaigned for the construction of family visitor’s center at the Mississippi State Penitentiary at Parchman and a separate prison for women in Pearl. She was a founder, fundraiser, and volunteer of the Jackson area chapter of Habitat for Humanity, which has constructed more than 600 homes in the metro area for those in need. Elise Winter was recognized for her steadfast commitment to volunteer service during the 2015 Governor’s Initiative for Volunteer Excellence Awards.

“With Elise Winter by his side, Governor Winter enjoyed a remarkable political career, but his commitment to public service extended well beyond electoral office,” said MDAH director Katie Blount. “He led the MDAH Board of Trustees for nearly fifty years, making an unmistakable impact on the department and the state.”

William F. Winter joined the MDAH Board of Trustees in 1957. During his time as board president, Winter oversaw the opening of the Eudora Welty House & Garden, the restoration of the Old Capitol, and the construction of a state-of-the-art archives and history building that the state legislature named for him.

Winter also encouraged the department to strengthen its focus on African American history in Mississippi, acquiring significant collections of papers, mounting award-winning exhibits, and offering grants for the preservation of sites associated with African American history. Most notably, his close friendship with Myrlie Evers led to her decision to donate the Medgar and Myrlie Evers Collection to MDAH in 2002.

The opening of the Museum of Mississippi History and Mississippi Civil Rights Museum in 2017 is Winter’s greatest legacy at MDAH. Winter helped convince state leaders of the need to build the Two Mississippi Museums, and he was instrumental in securing public and private funds for the project.

MDAH director Katie Blount said, “These museums stand at the intersection of William Winter’s greatest passions—history, education, and racial justice. Generations of young people will come here to experience the stories that have shaped our state and nation.”

More details about the celebration will be released at a later date. For more information visit mdah.ms.gov.

The 2022 Medgar Wiley Evers Lecture Series featuring Princeton University's Eddie Glaude Jr. will take place at 6 p.m. on Thursday, April 28, at the Two Mississippi Museums. The event is free and open to the public. For more information, visit the MDAH Facebook page or email info@mdah.ms.gov.

The World of Marty Stuart exhibit will debut at the Two Mississippi Museums in Jackson on Saturday, May 7, coinciding with the inaugural Mississippi Makers Fest, a music, food, and arts festival on the museum grounds.

“We are thrilled to host The World of Marty Stuart exhibit and can’t think of a better way to kick it off than with the Mississippi Makers Fest,” said Pamela Junior, director of the Two Mississippi Museums. “Marty represents what it means to be a creative and hardworking Mississippian, and that’s what this festival will celebrate. We have a phenomenal musical lineup and several incredible food and art vendors from across the state.”

"It’s been incredible to work on this exhibit with Marty Stuart, a true pioneer in the preservation of country music history," said Shane Keil, MDAH director of curatorial services. "The World of Marty Stuart not only showcases Stuart’s phenomenal artifact collection but highlights his journey to country music stardom. Visitors will see the role and influence of his small town Mississippi upbringing that took him to the world stage and ultimately has brought him back home."

The World of Marty Stuart is brought to you by the title sponsor, Blue Cross & Blue Shield of Mississippi, as well as by AT&T and Visit Mississippi. Visit mdah.ms.gov to learn more about the exhibit.

To celebrate the launch of the exhibit, the Mississippi Department of Archives and History will host the inaugural Mississippi Makers Fest. North Mississippi Allstars will headline the all-day music festival. Other performers include Mr. Sipp, Framing the Red, Chapel Hart, the Chad Wesley Band, 5th Child, and more. Entergy Plaza at the museums will be packed with dozens of art and food vendors for this free event dedicated to celebrating Mississippi creativity in all forms.

The Mississippi Historical Society annual meeting will take place on the campus of the University of Southern Mississippi and at the Historic Eureka School Museum in Hattiesburg.

The Mississippi Historical Society annual meeting will take place on the campus of the University of Southern Mississippi and at the Historic Eureka School Museum in Hattiesburg. 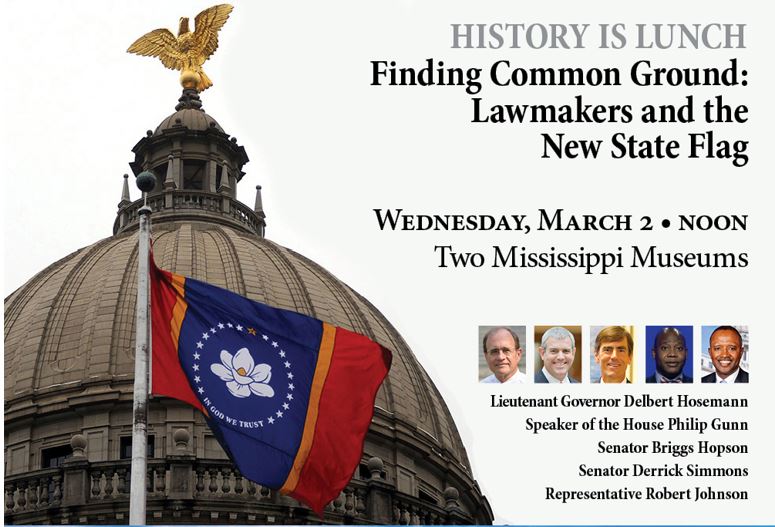 On Wednesday, March 2, at noon, the Mississippi Department of Archives and History will host legislators for a special History Is Lunch program–Finding Common Ground: Lawmakers and the New Flag. Lieutenant Governor Delbert Hosemann, Speaker of the House Philip Gunn, Senator Briggs Hopson, Senator Derrick Simmons, and Representative Robert Johnson will discuss the process of adopting the new Mississippi flag.

“MDAH was proud to support the Flag Commission in its historic work,” said MDAH director Katie Blount. “We are happy to be hosting legislators for History Is Lunch to talk about the transformation that the new flag has brought to our state.”

In 2020, the Mississippi legislature passed a bill that removed the 126-year-old state flag and created a commission that would be responsible for choosing a new design to be on the November statewide ballot.

The design selected by the commission was supported overwhelmingly by the voters, ratified by the legislature as the new state flag, and signed into law by Governor Tate Reeves. This program will take place in the auditorium of the Two Mississippi Museums, the same room where the flag commission met and the bill signing took place.

MDAH livestreams videos of the program at noon on Wednesdays click here.

To view this event after air time click here.

The weekly History Is Lunch lecture series of the Mississippi Department of Archives and History explores different aspects of the state's past. The hour-long programs are held in the Craig H. Neilsen Auditorium of the Museum of Mississippi History and Mississippi Civil Rights Museum building at 222 North Street in Jackson.

The Defenders to Show at the Two Mississippi Museums 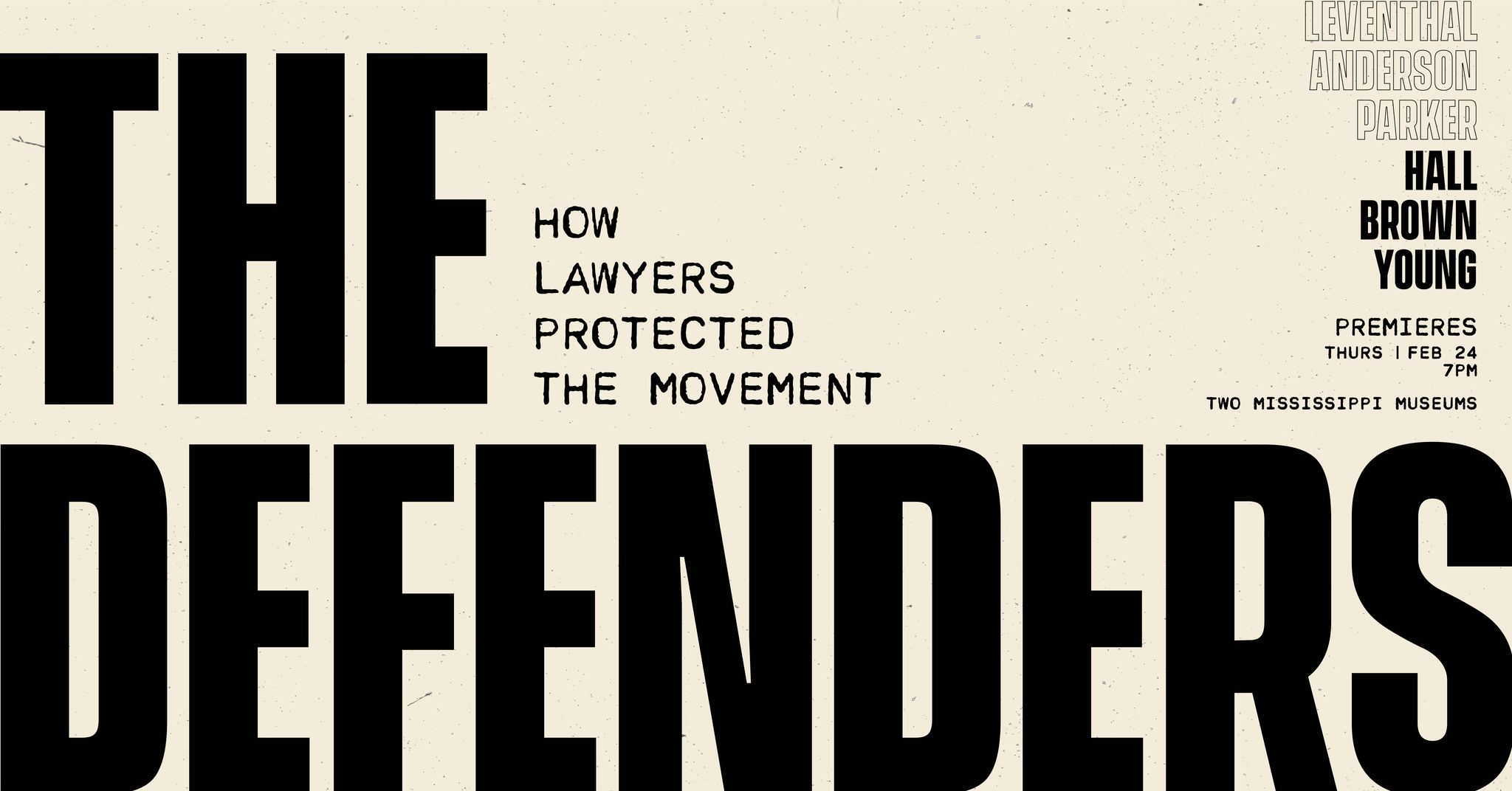 On Thursday, February 24, at 7 p.m. the Mississippi Department of Archives and History (MDAH) will premiere The Defenders: How Lawyers Protected the Movement in the Craig H. Neilsen Auditorium at the Two Mississippi Museums. Presented by Butler Snow and the Foundation for Mississippi History, the documentary film was produced by Red Squared and MDAH.

The Defenders focuses on Mississippi lawyers who represented African Americans in the years leading up to and during the Civil Rights Movement. Few in number, and with limited resources, lawyers representing African Americans in Mississippi lost more cases than they won during the 1950s and 1960s. Though circumstances were difficult, hundreds of lawyers were inspired to work in Mississippi and transformed its legal infrastructure for future generations. Their work demanding equality of treatment under law for Black citizens also changed the nation.

"We knew when we opened the Mississippi Civil Rights Museum in 2017 that there were stories we had not finished telling, including the story of the role of lawyers in the movement,” said MDAH director Katie Blount. “We are proud to join our partners and the lawyers themselves in highlighting this fascinating and critically important story.”

To view the official trailer for The Defenders click here.